The leading manufacturer of the most enjoyed high-definition action cameras, has outdone itself yet again. GoPro’s Hero4 Session is the fairly new, fun-size, waterproof, no-fuss wearable camera for all the video lovers out there. The pocket-size camera is 50% smaller and 40% lighter than the other Hero4 models, making it ‘the most wearable and mountable GoPro ever‘- used for anything, from extreme sports to just hanging out with friends.

How does it work? 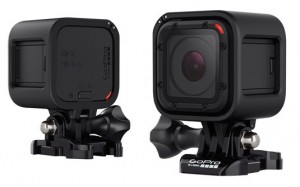 Most of the Session’s core features are covered by one button on the top. Next to this is a small LCD screen that lets you know how long you’ve been rolling, the amount of pictures you’ve taken, the quality of video you’re shooting and remaining battery life. Another button on the back is mainly used for pairing the Hero4 Session with a smartphone or flagging a video highlight so you can find it easily while editing. Once paired, you’ll be able to view a live feed from the Session and tweak video and photo settings.

What can it do?

The Hero4 Session is waterproof, it has built-in Wifi, Bluetooth, nighttime shoot exposure settings, auto low light feature and a QuickCapture feature that can both turn the camera on and begin recording immersive videos—all with the press of a button. It has a 170 degree wide angle lens and captures an ultra-wide field of view. Pretty impressive to say the least.

How is it different?

The Hero4 Session is only 74 grams and does not require protective housing for the camera. Allowing it to be a proper lightweight wearable camera that you can carry anywhere. 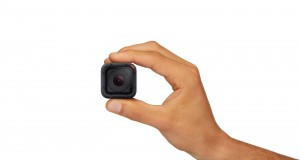 Unlike the other GoPros available, Hero4 Session has a QuickCapture mode, which basically means the camera is always on (!)- Ready to shoot at the press of a button. Meaning that from standby, the camera will power on and begin recording a video after about 3-5 seconds from the press of the Shutter button. Allowing you to easily capture all those unexpected moments that you always say you wish you had caught on camera.

Unlike other Hero4 counterparts, the GoPro Session does not need the separate housing that had made these cameras waterproof to this date. Although it can’t go as deep underwater as other GoPros (up to 33ft), it is still that much more comfortable.

The Session has a number of shooting modes ranging from 1440p at 30 frames per second to 480p at 120fps. Its footage is well-known for its lifelike resemblance and its crisp details, as well as advanced audio capabilities with dual-microphone design.

Why the Hero4 Session?

Being the smallest action camera to hit the market, the Hero4 Session definitely made a splash. It is the ultimate wearable and mountable camera set on providing users with a seamless and easy experience, while supplying high quality footage. Let’s face it, we all want amazing photos with minimum hassle. If simplification and ease is not the greatness of wearables, what is?

So congratulations to GoPro Hero4 Session for winning wearable of the week, we thank you for creating an easy, compact and quality wearable action camera!

Wireless charging for your wearable