So, what’s the difference between the two? Augmented reality (AR) essentially uses computer software to create images within applications that allow you to interact with virtual content in the real world. Virtual Reality (VR), on the other hand, is the creation of an entire virtual world that you can completely interact with, without being able to tell the difference between the real world and the virtual one. So in other words, while augmented reality blends between the real and virtual (often enhancing the features of the real world), virtual reality fabricates a completely different world.

In particular with the latest ‘Pokemon Go’ craze, augmented reality is well on its way to becoming mainstream as everyone looks to incorporate AR into making our daily lives more efficient and convenient. Let’s take a look at a few AR companies that are helping us get there!

Infinity Augmented reality is on a mission to allow people to interact with augmented reality by utilizing camera sensors to map a 3D environment and project 3D holograms as though they are part of everyday life. For example, you could be walking down the street and see a 3D hologram of your favorite movie character. They also have a driving assistant that helps you navigate traffic, a calorie counter that estimates how many calories are in your food, and much more!

Holiton offers augmented reality solutions for retail, and has already partnered with some of the world’s biggest retail companies, including UNIQLO, Louis Vuitton, and De Beers. The idea is to allow consumers to create virtual showrooms where customers can, ‘try before they buy,’ without even having to actually try the product. For example, you can try different colors of eyeshadow or lipstick, try on clothes in a ‘magic mirror,’ and much more…all through augmented reality!

Vuzix develops smart glasses, which are essentially act as Android-based wearable computers for both the enterprise and entertainment and entertainment world. Their glasses offer various types of solutions depending on the consumer focus, such as  2-way video for business meetings, drone vision for racing, or wearable displays for mobile and HD gaming. 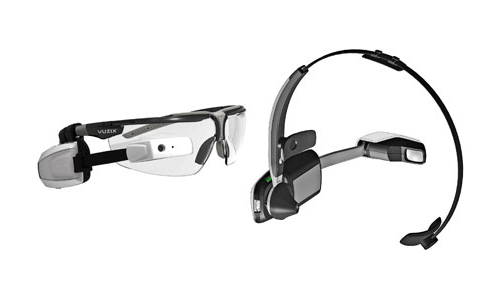 All these players are essentially connecting the pieces to make augmented and virtual reality the new way of conduct and bringing into play new forms of devices including smart glasses. User experience is essential in these new devices and charging is undoubtedly a focal point. That’s where Humavox comes into play. With Humavox’s ETERNA platform, there is no need to awkwardly attempt to plug the smart glasses into an outlet. ETERNA wireless charging solution is a minimal- size solution that gives users the ability to comfortably charge without the hassle of dealing with cords, rather by simply providing a ‘drop & charge’ experience! All you have to do is drop the glasses in a Humavox-enabled station and begin to charge—making augmented reality that much closer to becoming the new reality.