Humavox – the Winner of the ECN Impact Award 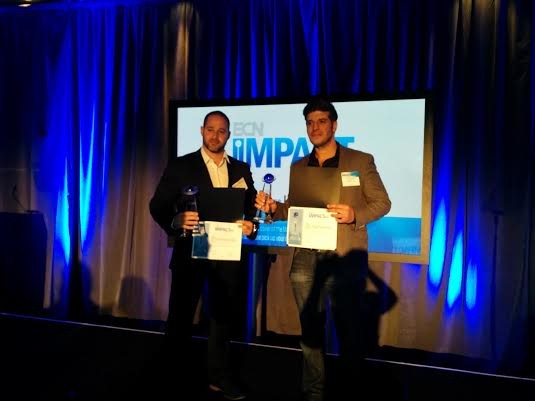 Humavox is proud and honored to win the 2014 ECN Impact Awards in both categories: Microwave and RF and Market Disrupter.
ECN Impact Awards winners were announced yesterday, May 7, 2014, at an award ceremony at the Cosmopolitan Hotel in Las Vegas. Humavox co-founders Omri Lachman and Asaf Elssibony attended the ceremony and received the award.

The ECN IMPACT Awards are given to the most influential products and services in the electronic components industry during 2013 in 13 different categories. Humavox wireless power platform ETERNA™ was recognized the best product in Microwave and RF category. Humavox ETERNA™ was also awarded the game-changer product of 2013 in the special recognition award, Market Disrupter, given to products that made a significant impact on the industry.