Humavox co-founder and CEO Omri Lachman was interviewed at the October issue of EEWeb Pulse magazine and discussed Humavox technology and its unique wireless charging stations. Read the first part of the article. 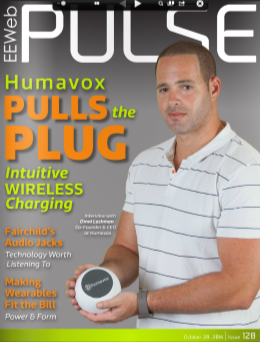 Humavox hates a tangled mess of power cords, so they did something about it. The Israeli based electronics developer took a fresh look at people’s tech habits when creating technology for boxlike,

wireless charging stations that suit just about any device. Whether hearing aids, smartphones, or tablets, Humavox has the technology to make recharging electronics devices a seamless, intuitive experience for users. By applying “the Dad Test”—Would my father use this technology?—the Humavox team is developing a portfolio of effortless charging solutions.

EEweb spoke with Omri Lachman, co-founder and CEO at Humavox, about the company’s work to replace the 5-cent USB cord, the benefits of wireless charging, and how RF cavity resonance enables wireless charging stations. Lachman also discussed the company’s collaboration with Texas Instruments as well as the user-centered philosophy which defines research and development at Humavox.

Humavox specializes in wireless charging solutions, so could you give a little history on the field, explaining the company’s development rationale and current technology offering?

Nikolai Tesla developed wireless power technology using magnetic induction over a century ago, and since then various companies have attempted to perfect this method, mostly aiming to charge cell phones. The initial motivation for wireless charging started to show up with smartphones and tablets. At Humavox, we think about wireless charging from a user-experience point of view first and then from a technological standpoint.

The first question that we had to ask ourselves was whether the device that needs to be charged, should actually be placed on a mat. Is doing that intuitive for users? Probably not, because people constantly engage with the device, constantly picking it up and checking it. So even if I had a charging station here on my desk, charging would start and stop every second. That’s the big void that we saw, and we decided to develop a solution. Ultimately, we are trying to replace the 5-cent USB cord and the USB port on the PCB of the device. Our replacement has to be cost-effective and deliver a true value – not just a mild improvement. Our replacement has to work seamlessly, and if it is turning into a small rocket-science project, then we have gone too far.

When we started to work on the technology, we made a decision to build a platform rather than a component or product. You can’t force users to do something that you want them to do – it has to be intuitive. When I see a new technology, I always say to myself, “Awesome, but will my father use it?” We were looking at technology that can be integrated into products and devices from all life categories, not just smartphones and tablets. I wanted a real solution that everyone could use.

How exactly does this technology work, and what advantages does it offer the user? 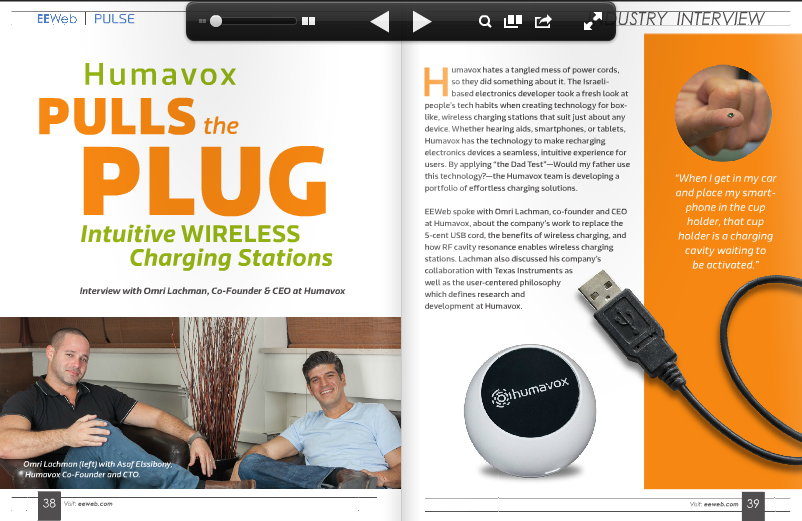 We did not start developing a technology without knowing how to fit it into a product; we thought about the user first, then the product, and then about how we can make the technology fit that idea. Our one guideline was to make sure that the technology fit the user seamlessly. This meant that the charging station could not be limited to just a single surface.

Our first project was studying device-usability patterns of the hearing impaired. In the study, we discovered a window of opportunity – when going to sleep at night, a hearing impaired person takes the hearing aid out of his or her ear and drops the device in the box that it originally came in. We knew that was the exact action we needed to mimic with our charging station. Instead of dropping a device into a box just for storage, we wanted the device to charge while being stored overnight.

We noticed that there are already so many boxes and storage areas for devices, so our goal with our product NEST was to turn these boxes, or cavities into chargers. For me personally, when I get into my car, I place my smartphone in the cup holder. That cup holder is a charging cavity waiting to be activated. The technical name for this technology is “RF cavity resonance” but we are doing it in a very unique way. Allowing the user to drop a device, especially one as tiny as a hearing instrument, into a storage cavity where it would charge at high efficiency no matter its alignment angler or placement position on the charging pad was the bigger challenge, and this is what our technology enables.

To read the full article...